Madagascar has always been an enigma. Very few people we know have visited this fourth largest island in the world, a mere three-hour flight from Johannesburg. International interest in this unique country is mounting, resulting from the classification of Madagascar as one of the of the earth’s hotspots in biodiversity aided by a host of intriguing nature and wildlife documentaries, precipitating a growth in ecotourism. We were curious ourselves to learn more about the country and were blown away!

Madagascar is truly an enthralling and fascinating place to visit.

For adventure travelers, nature and wildlife enthusiasts, the island has some of the highest concentrations of unique plant and animal species found nowhere else on Earth. Approximately 80% of fauna and flora found in Madagascar are endemic, including the magical lemurs, most of its recorded birds and the highest number of the world’s chameleon species.

Madagascar has lost huge amounts of forest due to human exploitation and climate change and this habitat destruction is severely threatening its world-renowned fauna and flora. The main causes stem from “slash and burn” deforestation for expansion of crop fields, fuel and construction material for the villagers, illegal logging for precious wood markets and a spate of natural disasters from extreme cyclones and severe droughts.

Our recent trip to Madagascar was planned around three distinctly different regions across the country. We were amazed by its captivating natural world, absorbing history and industrious, friendly people, many of whom live in poverty, surviving through subsistence farming.

Our first leg was to Nosy Komba, a 45-minute boat ride from Nosy Be – an idyllic island with tropical forests, surrounded by emerald clear water, where we watched local villagers in their fishing and transporting activities in wooden canoes, ferries and dhows. We had an opportunity to explore a tiny island, Nosy Tanikely, a Marine National Park where we snorkeled amongst the beautiful coral reef, with a myriad of different fish species, green and hawksbill turtles.

Our second leg was to the spectacular rainforests in the highlands of Andasibe-Mantadia National Park. We enjoyed the numerous walking trails through the dense jungle, marveling at the “hidden gems” amongst the huge trees and bamboo thickets – the myriad of wild flowers, ferns, mosses and toadstools.

One of our memorable experiences was observing the rare indri lemurs in their natural habitat. We heard them long before we spotted them, whilst labouring through steep difficult terrain amongst hanging vines and palms. Our efforts were rewarded by the eerie sounds of the indris – communicating through the most haunting and piercing wails. Following their resounding calls, we found a group of indris climbing and foraging between the high branches of the trees. The Indri is the largest of the lemur species, with black and white fur, bizarre dog-like heads, with long gangly arms and legs.

We were fortunate to see incredibly interesting wildlife in the rainforests including brown lemurs, sifakas, red ruffed and black and white ruffed lemurs and a tiny mouse lemur during a night walk. We also had quality sightings of a variety of stunning endemic birds, including collared nightjars, Madagascan paradise flycatchers as well as chameleons, geckos and a tree boa.

Our final leg to the south east of the country, was to a tented bush camp, situated on the banks of the wide Mandrare River, near the Andohohela National Park.  We had awesome activities with a passionate guide, exploring the “otherworldly” spiny forest habitats, with their stark, spine-encrusted octopus trees, euphorbias and baobabs and also gallery forests with towering tamarind and fig trees, in which we followed a large family of ring-tailed lemurs. Our group was enchanted by a spectacular, close-up encounter from a large group of Sifakas, with their beautiful white, silky coats – leaping and flying effortlessly though the air, like trapeze artists, between the spiny forest thorn trees.

We had opportunities to visit a local village and colourfully painted tombs in a sacred spiny forest and learnt about the traditions, customs and way of life of the Antandroy or ‘people of the thorns’ living within this harsh and compellingly unique part of the country.

Our brief, action-packed adventure to Madagascar was an inspiring and thought-provoking adventure. It is certainly not for the faint-hearted but for people who relish nature and adventure travel, it will leave an indelible mark on all who visit this special island. 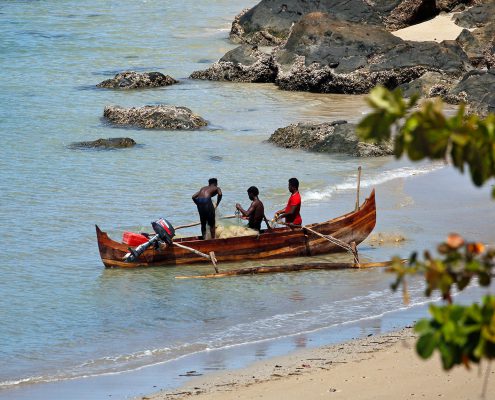 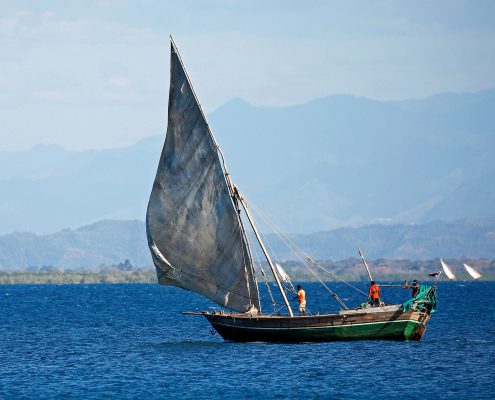 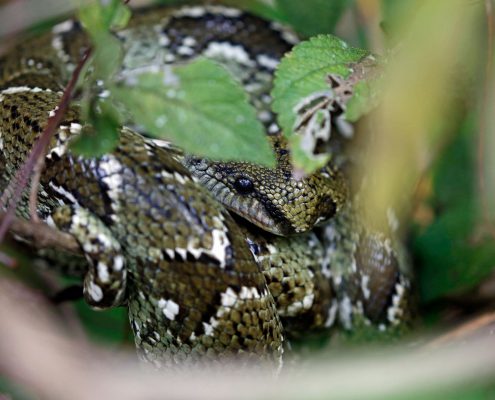 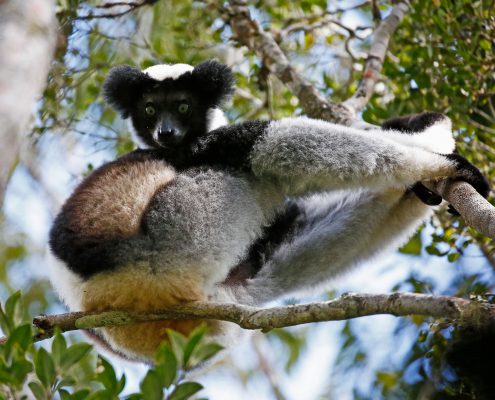 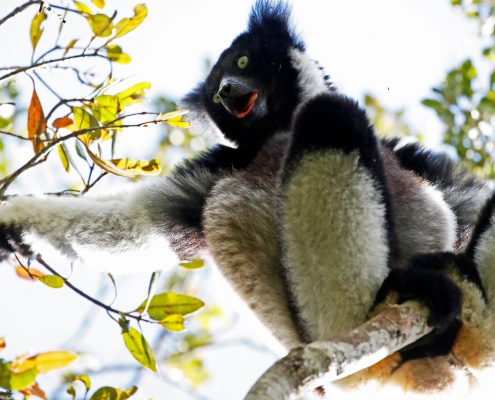 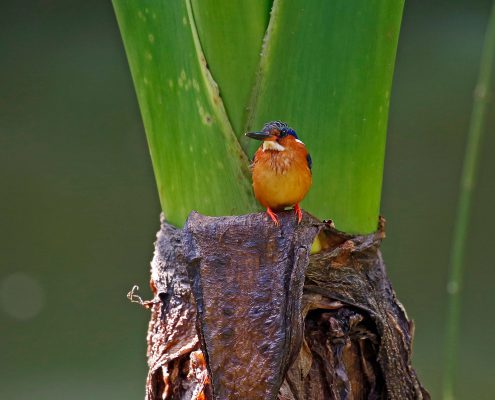 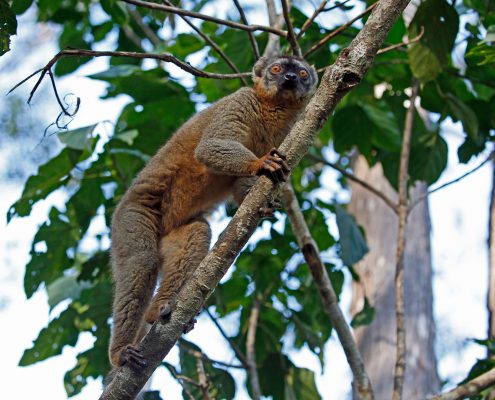 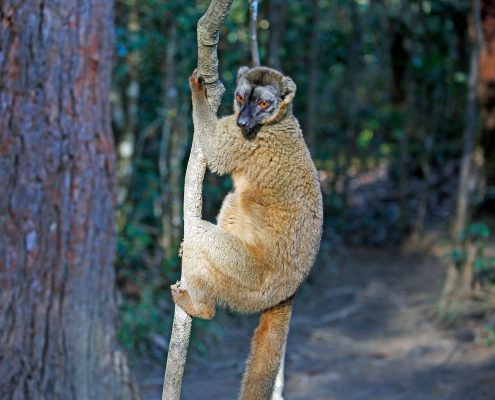 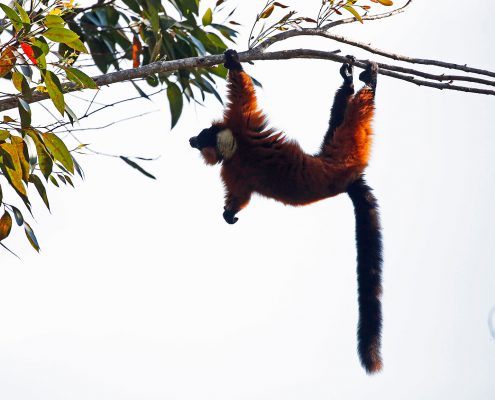 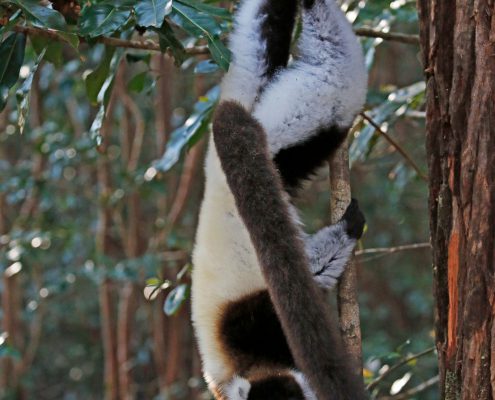 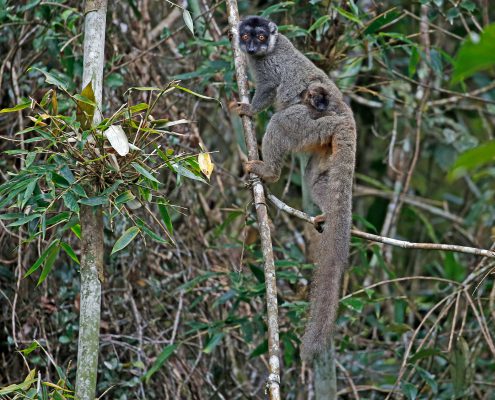 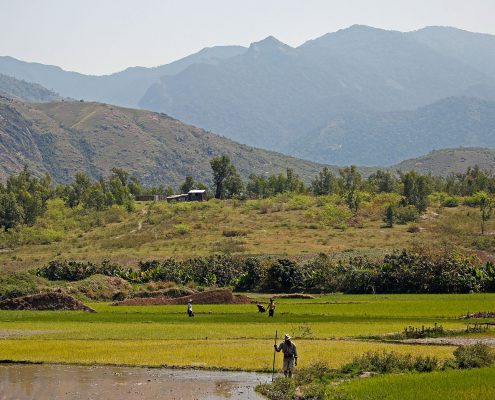 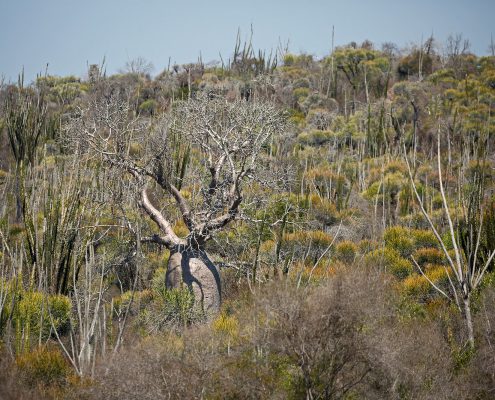 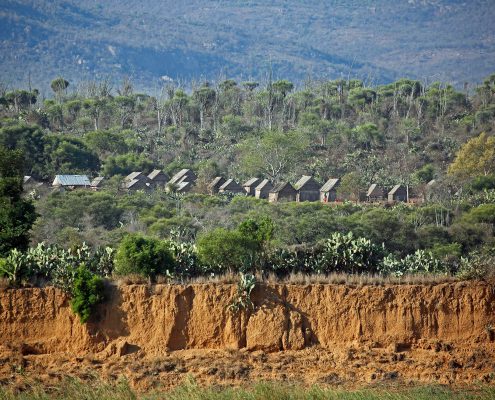 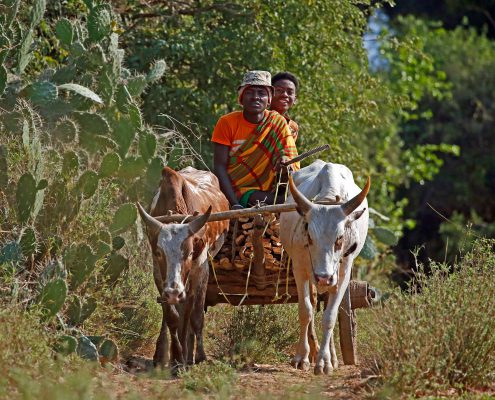 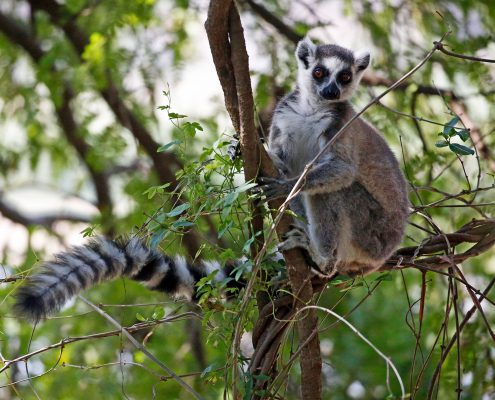 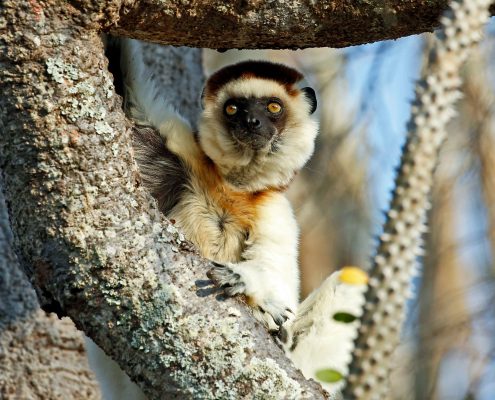 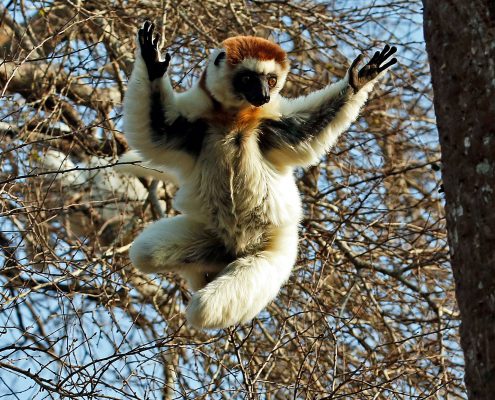 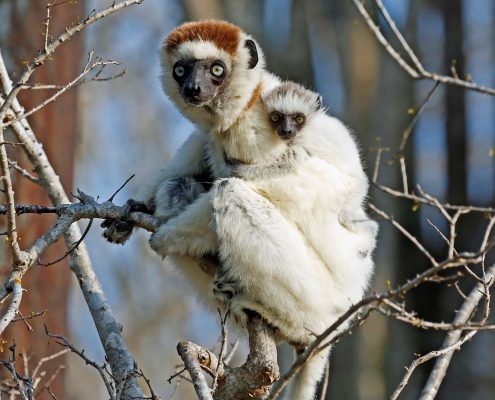 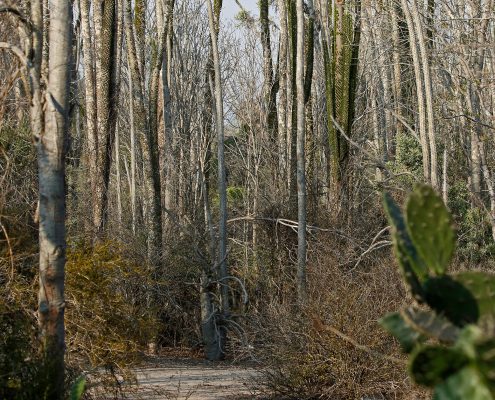 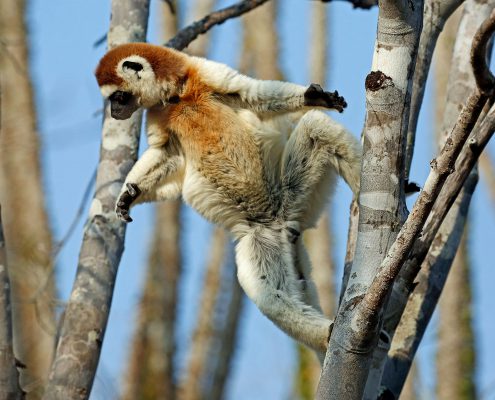 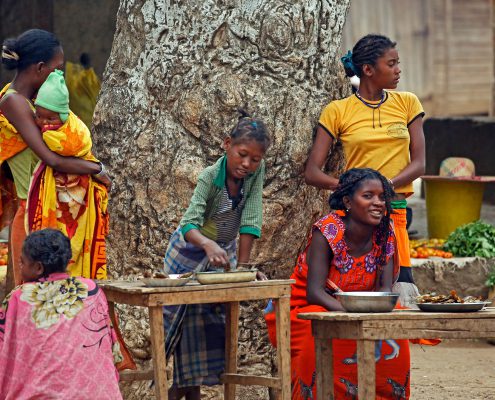 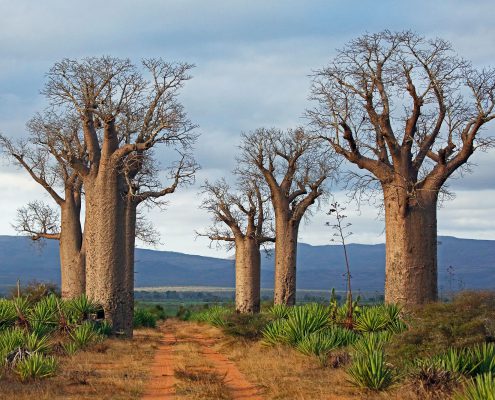 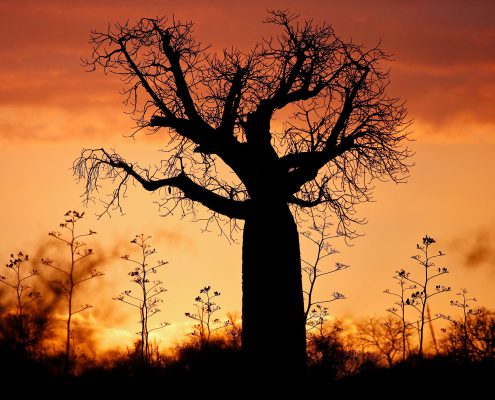 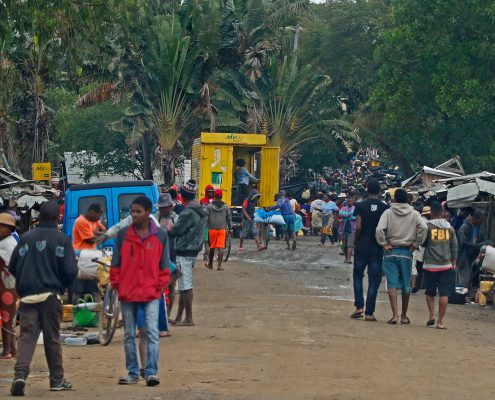 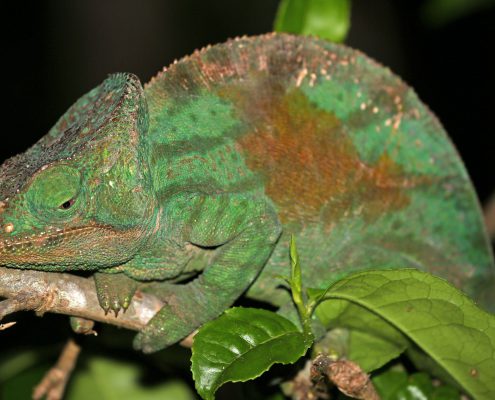 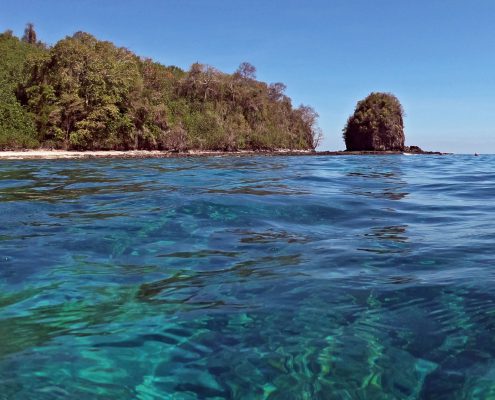 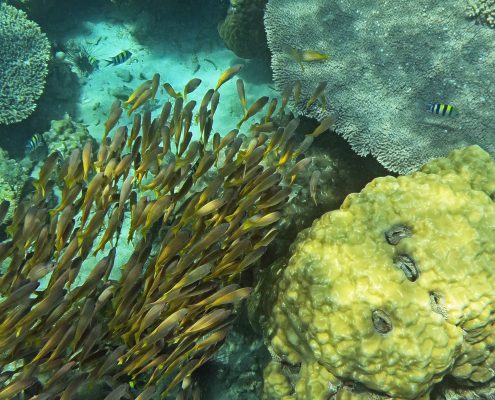 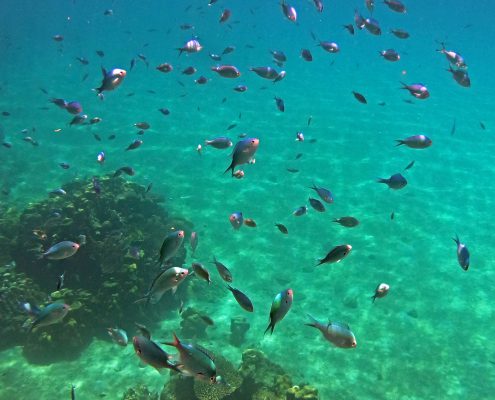