We Are Where We Have Been

Captivating! That, in a word, best describes the remarkable pictorial travelogue which John and Leigh have so skilfully depicted of their visits to some 18 far-flung and remote regions of the planet.

Mammals have featured in books for over 500 years according to Jonathan Kingdon and “derived mainly from travellers’ tales in guides that were best known as bestiaries.” Mammals “became the plaything of the privileged” and the “records of big game, were primarily designed for hunters.” He goes on to say: “it is with a deeper sense of involvement and intensity of interest that the work of home-grown authors,” such as himself, John and Leigh have begun to appear.

Finally, Kingdon suggests: “to know yourself you must get to know Africa. To catch glimpses of your ancestors’ world you must seek out some of the animals that they knew so well.” This is precisely what the authors have set about achieving in “We Are Where We Have Been.”

Their adventures have followed in the footsteps of some of the world’s great explorers, Scott, Amundsen, Shackleton, Hillary and Tenzing amongst them. They have climbed Africa’s highest peak Kilimanjaro, as Meyer and Putscheller did some 130 years ago; explored Genghis Khan’s big sky country Mongolia, sometimes on horseback; witnessed the unique characteristics of the Galapagos much as the discoverer, the Bishop of Panama did 485 years ago.

The photographic images invite the reader to look into the eyes and “feel the mood” of the gorilla, leopard or young cheetah.

From the savannas and bushveld of Africa one is transported in a heartbeat into the vividly contrasting dolomite peaks and valleys of Italy. Off with safari clothing and on with Arctic gear, such essential attire in the polar regions of Alaska, Canada and Antarctica – the extraordinary pictures of those adventures speak several thousand words.

No wildlife adventure travel is complete without a visit to Madagascar, home to myriad chameleons, birds and the unique lemur, sifaka and indri primates.

Living vicariously through the adventures of this book sharpens our understanding of the importance of maintaining a balance between the interests of man on the one hand and the interests of everything else in whose midst we live, on the other. 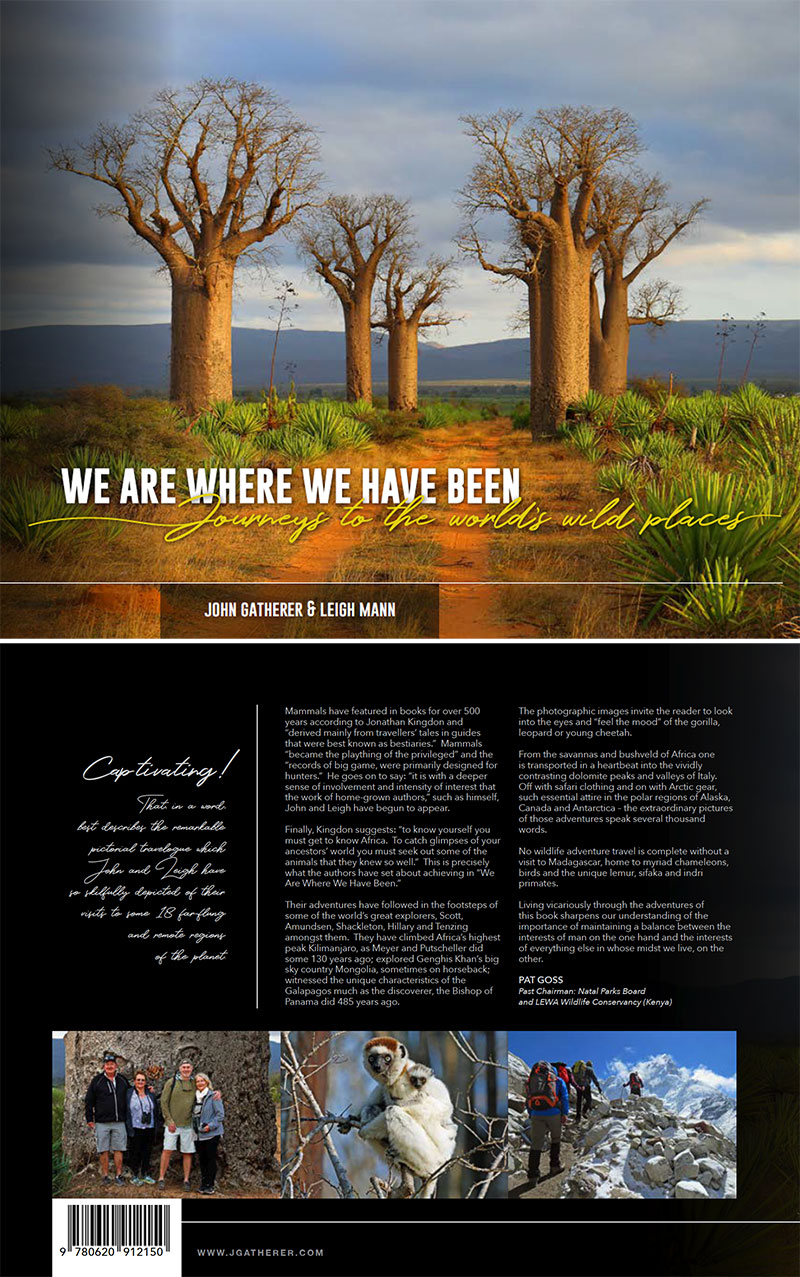